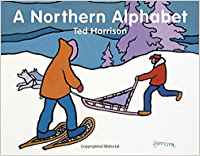 I “discovered” Ted Harrison a few years ago when I came across a poster of his work. About a year ago I donated it to the local elementary school, and then the librarian sent me a book to read about him. I was hooked!

I received a copy of this book – A Northern Alphabet by Ted Harrison – from Library Thing in exchange for my honest review.

Ted Harrison (1926-2015) was born in England but when he came to Canada he fell in love with the northern part of the country and stayed for the rest of his life. His paintings changed to capture the beauty of the Yukon and its people, as shown in this book. He was famous for his remarkable bold-coloured paintings and in later years he was made a Member of the Order of Canada for his contributions to Canadian culture through his paintings and books.

In A Northern Alphabet, for every letter of the alphabet Mr. Harrison illustrated with paintings from what he saw and experienced around him in the Yukon. His work is simplistic and meaningful, delightful and full of colour.

Two examples: H h The husky is watching the boys play hockey. N n  The northern lights shine in the sky at night. The art illustrating those letters gives readers an education in some of the culture of Canada, as it does throughout the book.

A Northern Alphabet by Ted Harrison is a beautiful book for young children to learn both the alphabet and something about the culture of the Canadian far north. They will love that the renowned artist chose to paint a moose a deep pink, a bear orange, and the sky always in bands of bold colour. They will even learn new words such as anorak, Inuit, muskeg. This is an excellent book to introduce children to art that looks as if it was made just for them, and for anyone who wants to know more about Canada’s north.

You can find A Northern Alphabet by Ted Harrison on my BUY THE BOOK page. I also post my reviews on Amazon.com, Amazon.ca, Goodreads, and Chapters.Indigo if available there.

Your comments are very much appreciated.

Thank you for reading, and … Creative Musings!  🙂 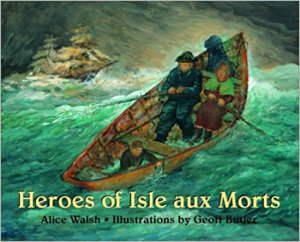 Heroes of Isle aux Morts by Alice Walsh is an amazing true story about a very hazardous rescue that happened in July 1828 off the coast of Newfoundland before it was a province of Canada.

Early one morning Anne Harvey woke to the sound of a ferocious storm and above the wind a distress signal. Then she saw a flare light up the sky, meaning there was a ship in trouble and without help its passengers would surely drown. Many ships had been driven onto the rocks in storms, and Anne and her father knew there wasn’t much time for a rescue. The island where the family lived was called Isle aux Morts, meaning island of the dead, because of so many people losing their lives off their coast.

Anne, her father, her younger brother, and their large Newfoundland dog, Hairy Man, loaded into a dory and launched into the waves. Newfoundland dogs are known for their brave deeds, and what the family did to save those people made them, and especially Hairy Man, heroes. It’s an unbelievable story, and yet it’s true. History notes how King George IV, king of England, recognized the family as heroes for saving the lives of one hundred and sixty-three passengers, one by one, in treacherous conditions.

Heroes of Isle aux Morts is a must-read story of the ship the Despatch, the Harvey family, a Newfoundland dog, and a historical rescue at sea. Alice Walsh, formerly from Newfoundland, wrote a breath-taking story of drama and bravery. The illustrations by Geoff Butler are fantastic, showing how rugged and dangerous the rescue was that dark, stormy day.

You can find Heroes of Isle aux Morts by Alice Walsh on my BUY THE BOOK page. I also post my reviews on Amazon.com, Amazon.ca, Goodreads, and sometimes Chapters.Indigo. 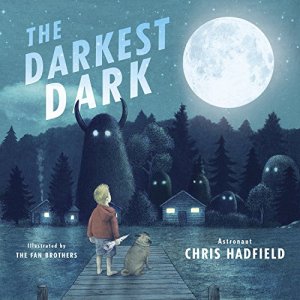 I was very happy to win from Library Thing a copy of The Darkest Dark by Chris Hadfield. This is my honest review.

The Darkest Dark is a non-fiction picture book written by Canadian astronaut Chris Hadfield – with Kate Fillion – about his dream of being an astronaut from the time he was a little boy.

Chris loved to pretend play that he was an astronaut. It was something he imagined most of the time and dreamed about at night.

It was summer vacation when the moon landing was shown on TV on July 20, 1969,  so Chris and his family went to a neighbour’s cottage to watch it. Chris was amazed to see real astronauts walking on our moon. It was then that he realized that outer space is the darkest dark there is, and he knew he had a problem. He was afraid of the dark. How could he be an astronaut if he was afraid of the dark?

That night Chris did an experiment. Instead of waking his parents or leaving his nightlight on he sat in the dark. Before that day he was afraid of any dark shadows and he imagined aliens in his room, but that night something was different. Nothing around him had changed, but Chris had changed. He realized the beauty of the dark sky and he made the decision to overcome his fear so that he could be what he most wanted … an astronaut.

This is a wonderfully told story about Chris Hadfield‘s childhood dream and his fear, the moment his life changed, and that dreams can come true. It is an encouraging story for children – anyone, really – who have hopes and dreams but fear stands in the way.

The Darkest Dark has gorgeous illustrations by The Fan Brothers, Terry and Eric. The pictures are mostly dark, which suit the story very well.

You can find The Darkest Dark by Chris Hadfield on my BUY THE BOOK page. 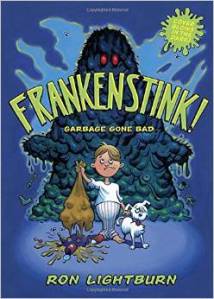 Frankenstink! Garbage Gone Bad is written and illustrated by Ron Lightburn of Nova Scotia, Canada. I was privileged to meet Ron at his book signing in April and was delighted that he personalized a copy of Frankenstink! for me and one for my grandson. Although my grandson is almost ten I know he will enjoy this book – which I am giving him for his birthday in June, if I can wait that long!

First of all, look at that cover, shown above. It glows in the dark! 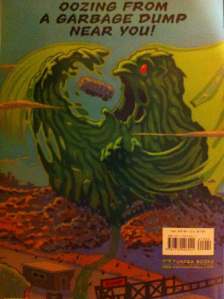 <– And look at the back cover shown here.  Isn’t this impressive?

In fact, the book jacket is a poster! How cool is that! 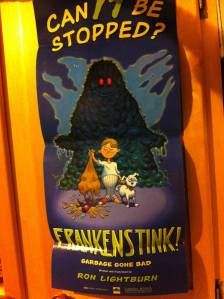 Ron Lightburn is well established internationally as an illustrator, however, this is the first book he both wrote and illustrated. He told me it was a long wait until it was picked up by a publisher but it’s worth it.

Written in fun rhyme, Frankenstink! is the story of a little boy who would not clean up his room. He simply kept shoving stuff under his bed, until … one night it mutated into a huge garbage monster. Oh my! The monster was hungry for trash first and became more and more greedy. After devouring everything it could find to eat in the house, it moved on down the street to the neighbours’ garbage cans and beyond, growing bigger and smellier and nastier as it went.  I won’t give away more than that about the story, except to say there is a satisfying funny surprise ending.

The author’s descriptions along with his illustrations make this book an enjoyable environmental adventure. The gooey, oozy, garbage monster will have young readers eagerly turning pages to follow its progress.

Ron Lightburn wrote this book with a lesson in mind for children. He made recycling, composting, and cleaning up very memorable in an entertaining way through showing the experience of one young boy who refused to do them.  Released during the week of Earth Day, Frankenstink! Garbage Gone Bad is a wonderful book for children of all ages and ideal for the classroom. This book will appeal more to boys because of some of the words and creepy images the author included, but it will also appeal to girls who love a good story. And it’s simply a gorgeous book!

You can find Frankenstink! Garbage Gone Bad on my BUY THE BOOK! page.

I received this book from Library Thing in exchange for an honest review.

This little book was a surprise. I knew it was coming, but I didn’t expect it to be so big for its size. By that I mean, this book may be small but it is jam-packed – in such a nice way.

Nancy Hartry grabbed my attention right away with how she began this tale. She set the scene in chapter one, then hit with a gut-wrenching punch in chapter two. Even so, this interesting – yet painful – story that’s easy to read, easy to follow, easy to understand, is hard to put down until the end. And once there it evokes a satisfied sigh and leaves the reader thinking it all over.

Carolyn and Jimmy were best friends. When Jimmy got hurt, Uncle Ted’s story was that he fell off the swing. What nobody knows is that Carolyn saw the whole thing, but who can she tell? And what good would it do?

This story is set in 1958, after World War II, during a time of struggle and recovery in Canada, a historical time that will change the nation. Nancy Hartry writes in a way that illuminates that era without the reader realizing there is a history lesson being presented.

This book is well worth the read. It is very believable and captures the reader for a step back in time to learn what life in Canada was like then, and what it means to be courageous, dedicated, and truthful.

Watching Jimmy by Nancy Hartry was a finalist for the TD Canadian Children’s Literature Award, the Geoffrey Bilson Award for Historical Fiction for Young People, and the Ontario Library Association’s Golden Oak Award.

If you enjoy historical fiction you will certainly appreciate Watching Jimmy by Nancy Hartry.

You can find Watching Jimmy listed on my BUY THE BOOK! page.