Book Review: The Princess and the Frogs – by Veronica Bartles 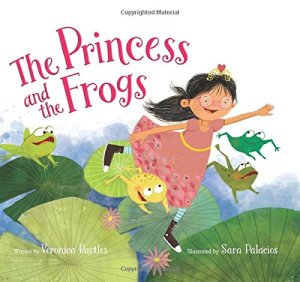 You know the saying, sometimes you have to kiss a lot of frogs to find a prince. Well, this little princess just wanted the frog.

The Princess and the Frogs, written by Veronica Bartles, is a clever twist on the Princess and the Frog fairy tale. This little princess wanted a pet that would be her best  friend. It was hard for the Royal Pet Handler to find one to match her specifications – one that liked to swim and play and jump all day, one that would match her green dress and at night would sit on her pillow and sing to her. Finally it was decided that a frog would be the perfect pet.

Princess Cassandra was so happy and everything was fantastic until, in her delight, she kissed the frog. Well, you know what happens in fairy tales when the princess kisses the frog. Yep! She had herself a prince. That was NOT what Princess Cassandra wanted! She put the prince to work in her castle and the Royal Pet Handler had to find another frog for her. Alas, the same thing happened! Several times.

This story is beautifully illustrated by Sara Palacios. The little princess either wears her running shoes or goes barefoot and is always in her tiara and eyeglasses. She is a determined and smart little girl, making the Princess and the Frogs a delightfully funny story with an empowered female main character.

You can find The Princess and the Frogs on my BUY THE BOOK page.

4 responses to “Book Review: The Princess and the Frogs – by Veronica Bartles”