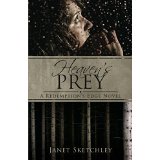 Pages: 322
Price: Paperback under $16; Kindle under $4
My rating: hard to read but harder to put down

I received a copy of Heaven’s Prey from the author for my honest review.

This was a novel hard for me to read but also hard to put out of mind. I had to know how it ended, and not only in order to write a review.

In Heaven’s Prey by Janet Sketchley we meet Ruth, the main female character who is still mourning the loss of her niece, a young woman who had been brutally attacked and murdered. We meet Tony, Ruth’s husband who refuses to accept the God to Whom his wife prays … for the killer! In a dramatic turn of events we meet the killer, Harry, who had escaped from prison and was not on the west coast of Canada where everyone was looking for him, but in Nova Scotia – on Canada’s east coast.

Mild spoiler alert: On her way home from a prayer meeting Ruth makes a stop at a convenience store. That’s when things get dramatic. In an odd turn of events Harry is there and kidnaps Ruth, not knowing her connection to his last victim (her niece) before he was caught. This traumatic event leads to dramatic change in the lives of Ruth, Tony and Harry.

Janet Sketchley is a strong writer. Heaven’s Prey is well-structured, dramatic, hard to read in places because of content, and keeps the reader interested in knowing if/how Ruth will survive, and what will happen to Harry.

Although this novel is a story of redemption and forgiveness it is definitely not a book for young readers. If you enjoy a good suspense with no foul language, scenes that are on the edge but not graphic, drama that rises and falls and increases again, then this is the book for you.

Heaven’s PREY by Janet Sketchley was a finalist in the 2014 Word Awards in the suspense category.

You can find Heaven’s PREY listed on my BUY THE BOOK! page.