Book Review: Songbird Under a German Moon – by Tricia Goyer 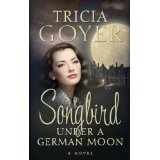 Songbird Under a German Moon by Tricia Goyer is set in the post WWII years in Germany. The story begins in a noisy twin engine airplane that is transporting Betty – a twenty-year-old singer – with several soldiers on their way to Germany,  but already there is drama. The plane is having engine trouble and must try to make a safe emergency landing in Nuremberg, Germany.

In Bayreuth, Germany, there is a famous opera house – Festspielhaus – where Hitler was said to enjoy operas, especially those of Richard Wagner. This opera house is where the musical entertainment is being performed for the soldiers, not far from the house where Hitler had sometimes stayed and where the ladies are now living between performances. But there is something creepy about that war damaged building, something unsettling.

When Betty, and Frank, a photographer for the military, first see one another romance is soon in the air. But Frank is not all he appears to be; he has a secret. He is not the only one with a secret, though, and when there is a murder those secrets start being revealed. Realizing her life may be in danger, Betty thinks she can trust Frank to help her.

Some scenes seemed a little stilted in this story, perhaps a bit unrealistic when dealing with human emotions in relationships, but the drama pulls one’s attention in another direction. It was easy to get interested in Songbird Under a German Moon by Tricia Goyer.

Interesting facts, around which Songbird Under a German Moon was written,  about Festspielhaus opera house, Wahnfried house, and Richard Wagner can be found on the Internet.

If you enjoy historical fiction with romance and a Christian flavour this may be the book for you. You can get a history lesson at the same time!

You can find Songbird Under a German Moon listed on my BUY THE BOOK! page.

4 responses to “Book Review: Songbird Under a German Moon – by Tricia Goyer”