In the emblem below, the thirteen diamonds of the maple leaf represent the ten provinces and three territories that make up Canada. The four red diamonds represent the four original provinces at confederation in 1867. Nova Scotia is one of those four.

There is much griping going on in some minds about it’s not being 150 years for all parts of Canada (and there are other reasons) so it’s not everyone’s celebration. In my opinion (for which you didn’t ask) that is hogwash! Canada is Canada. There will always be naysayers, no matter what country or reason of celebration. I get it that many feel because of some shameful and horrible historical events and practices and situations it’s not a happy celebration for them. I get that. And I understand that indigenous history goes back thousands of years before this, so let’s celebrate that, too. Can’t we come together and work on it? Can’t we make it better? This is a great country! Many nations have things in their history, much are ongoing, that are not celebratory, but that doesn’t mean hope is abolished or abandoned.

Canada is a great country in size, too, second in land mass only to Russia. Just to give some comparison – the United States is fourth in size, after China.

In celebration of 150 years, Parks Canada is making available – until the end of 2017 – free passes to Canada’s national parks, historic sites, and marine conservation areas. This is a good year to follow through on your plans to visit Canada. Also, the tall ships are going to be visiting 11 different communities in Nova Scotia throughout this summer. All across the country there are special events taking place this year.

Currently, in Halifax harbour here in NS, the USS Eisenhower aircraft carrier is anchored. Hopefully you can access this webcam view of the harbour, and this you tube video of the Eisenhower.

And look at this flower! The Canada 150 tulip, also known as the Maple Leaf tulip, is the official tulip of Canada 150. It resembles the Canadian flag through special breeding of two different varieties of tulips. Isn’t that fabulous? 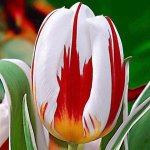 Canada’s contribution is significant in helping during world crises; my own father was a soldier in the Canadian Army that Liberated the Netherlands during World War II. Canada does have its problems and contradictions (who doesn’t?), but we are unified more than many other nations, and basically we are peace-loving. In fact, we’re mostly looking pretty good. Out of 155 countries we have been rated as the 7th happiest. (Below, I’m including only the first 20 on the list to show you.) Canada has been known as the best place to visit, to live, and to learn.  🙂  I love it here.

So, HAPPY NATIONAL BIRTHDAY TO ALL MY FELLOW CANADIANS, AND THOSE TO COME. As Prime Minister Justin Trudeau says, we welcome you!

Are you doing anything special this year to celebrate Canada’s birthday? (I’ve just done it — this blog post. 🙂 )

A Footnote:  A dear friend in the US sent me this music video, very moving and beautiful.