Bringing in the New Year

Can you believe 2016 is here already! How did you bring it in?

On New Year’s Eve eleven of us got together at my Dad’s. We all contributed snacks of varying types. Dad and a couple other people enjoyed working on a jigsaw puzzle awhile, and we all enjoyed the snacks, conversation, and table games. And snacks. And we ate and nibbled and snacked. Did I mention food? There was a lot of it – just snack food, some healthy, some questionable, all good. Perhaps I should have warned you that we are such party animals! .. who like to snack.  😉

At 12:50 my brother-in-law and nephew set up fireworks on Dad’s lawn near the bird feeders. (All survived quite well, by the way. 🙂 ) It wasn’t nearly as cold and deep with snow as two years ago when we did this. My daughter and son-in-law had also brought fireworks, so beginning at midnight both boxes were used which made a long and thrilling display.

Here are two images I captured through the kitchen window, not great ones but it gives you an idea of the colour, and you can imagine the sizzling, popping and booming going on. 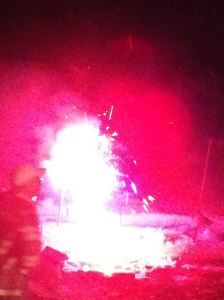 The final canister they set off was a big one. When it lifted off in a blast of colour and noise it did a surprising mid-air turn, shooting over Dad’s two-storey house and not missing it by much. whew!  That could have been an interesting ending to the evening.

Yes, 2016 has begun. A new year to try new things, improve on the already tried, and find success in achieving goals. I’ll write soon about that point.

How did you bring in the new year?

6 responses to “Bringing in the New Year”