Book Review: The Dragondain: a Moon Realm Novel – by Richard Due 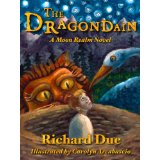 I received a copy of The Dragondain from the author in exchange for my honest review.

Having read book one of the Moon Realm series, I was eager to read book two. This volume, The Dragondain, continues from where the first one left off.

You can read my review of The Moon Coin, which is book one of the Moon Realm, to get an idea of the thrill of this series. The Dragondain takes the reader on another burst of adventures, and fills one’s head with images and scenes that are amazing and wondrous. It’s as if the author, Richard Due (pronounced Dewy) stored in his mind every fantasy story he ever read, picked out the most exciting inspiring parts, tweaked them, added the Dewy imagination, and out came this exciting fantastical world … or, I should say, worlds. Wonderful! Note: The illustrations by Carolyn Arcabascio at the beginning of each chapter add a creative extra to the story.

In The Dragondain: a Moon Realm Novel we are reunited with fifteen-year-0ld Jasper and his fourteen-year-old sister, Lily, as they continue in their search for their missing mysterious uncle Ebb. Using a special necklace, they take turns travelling to other worlds where they meet with all sorts of dangers and strange characters, enter into serious battles, and discover their own unique powers. This time more dramatic events happen at their uncle’s mansion and their own house to add to the suspense.

The Dragondain is very well crafted and cleverly executed, with the final scene set for continuation in another book. It isn’t done in a mean way, either, but as an invitation to continue on the journey with Jasper and Lily. I look forward to it! There is a fourth book already in line for after book three is released.

If The Dragondain interests you, then it is best that you start with book one – The Moon Coin (at the time of this writing The Moon Coin is free on Kindle for anyone with Amazon Prime) – so you will get to know the characters and background. If you enjoy fantasy you won’t be disappointed.

You can find The Dragondain: a Moon Realm Novel, book 2 listed on my BUY THE BOOK page.

Book Review: The Moon Coin (The Moon Realm series, book one) – by Richard Due 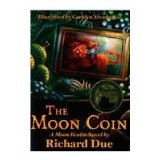 I received a copy of The Moon Coin from the author through Library Thing in exchange for my honest review.

It took me awhile to get to The Moon Coin on my R&R (read-and-review) list but once into it I stepped away from my usual habit of having two or three books on the go at once. This one, once I started reading it, wouldn’t let me go until I had reached the end, no cheating allowed. And once I reached the end I wailed, “Nooooo!”  Uh, yes, I wanted more.

The Moon Coin is a full course of detailed worlds with their populace and drama. It begins on Earth where we meet four-year-old Lily, and Jasper, her five-year-old brother, along with their parents, and their uncle Ebb with his  outlandish ‘tales’. Their mother doesn’t approve of his storytelling, but the children love to listen because the way he relates adventures is as if they were real to him, as if he had been there himself.

We then are taken from the introduction and meet the children nine years later to where the story really takes flight. There are strange creatures, a mysterious pendant, hidden places, time travel, danger, adventures, battles, and so much more.

The author, Richard Due (pronounced Dewy), debuted with this book, which is quite amazing. His worlds and their inhabitants are very well described and thought out in great detail. It is a most enjoyable journey if you appreciate a good fantasy. In fact, The Moon Coin was nominated in the 2012 Moonbeam Children’s Book Awards and became a Gold Medal Winner!

You can find out more about the author Richard Due, on his website. While there check out the illustrations by Carolyn Arcabascio. You can also enter the Goodreads giveaway for your chance to win a copy of The Moon Coin at the end of May!

The Moon Coin is book one of The Moon Realm series. Book two has been released, books three and four are to be announced,  and others are coming.

You can find The Moon Coin listed on my BUY THE BOOK! page.