We have a winner of Darlene Foster’s book Cerdito a juicio (Pig on Trial)!

Thank you so much to everyone who entered the draw/left comments for a chance to win a copy of Cerdito a juicio – Pig on Trial – by Darlene Foster.

Thank you, Darlene, for offering a copy to one of my readers.

Congratulations to Sue Slaght who thinks this book is “a great way to teach children history with such a unique experience!”

Sue, I’m sure you will enjoy Pig on Trial – in English and Spanish! I’ll mail your copy to you this week. 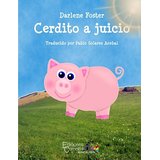 Thanks, everyone! You can purchase your own copy of Cerdito a juicio by finding it on my BUY THE BOOK page.

Posted in Giveaways, Mostly About Reading

A reminder, and another giveaway coming!

The day is almost over, and with it goes your chance to enter the draw for a copy of Darlene Foster‘s bilingual children’s book Cerdito a juicio  — Pig on Trial. This book is as good for adults learning Spanish as it is for children to enjoy.

Perhaps you know someone who would like this book. You can enter the draw for them, or direct them here.

Tonight at 9:00 EST a winner will be determined (thanks to an automatic random name picker), so check your email. I will make the announcement here tomorrow morning.

The next day, August 2, I will be offering my eighth 2016 monthly giveaway!

Thanks for reading, and … Creative Musings!

Poor Fredrick! He was innocently minding his own business when soldiers showed up and arrested him, and ten-year-old Sebastian could do nothing about it. When Father came home, immediately the decision was made to go and sort out the misunderstanding. He took Sebastian with him, and what transpires is not quite as easy a rescue as expected. Fredrick was slated to be executed, and  Fredrick is the family’s pet pig!

Imagine medieval times, bizarre accusations, a pig on trial and the efforts to rescue him – as told by a ten-year-old boy. Now you have an interesting story.  Plus it’s in two languages – English and Spanish.

When I asked author Darlene Foster if there was anything she wanted to tell me about the story or the writing of it, here is what she said:

“I got the idea for the story a few years ago when I learned that animals were put on trial and sometimes executed in medieval times. I thought that children might find that interesting. Then, I met someone who, when he was a child, had a pet pig called Frederick, and I loved that name for a pig. As often happens, I couldn’t sleep one night, so I got up and scribbled down the first draft of the story. When I moved to Spain, I was introduced to a publisher here. He offered to translate the story into Spanish so we could offer a bi-lingual book to children (and adults) who wanted to learn either language. I am pleased with how the book turned out and will be doing readings at four outlets in Spain this summer.”

Congratulations, Darlene! 🙂  This is a wonderful book.

Here’s an inside view to show you how it’s laid out in two languages:

Now, to my readers located anywhere in the world I am offering one copy of Cerdito a juicio. If you want to put your name in for your chance to win this book, all you have to do is leave a comment about anything mentioned in this post. Easy peasy.

You have until July 31 at 10 PM AST, that’s 9 PM Eastern, to get your name in. Don’t put it off! I will use an automated random name picker to select one winner. The next day, August 1, I will make the announcement of who won  Darlene Foster’s Cerdito a juicio.

You can find Cerdito a juicio on my BUY THE BOOK page.

Book Review: Amanda in Alberta: The Writing on the Stone – by Darlene Foster

I received a copy of Amanda in Alberta: The Writing on the Stone from the author in exchange for my honest review.

If you haven’t met Amanda before, you’ll need to know she is a twelve-year-old, adventurous, travel-loving girl who seems to find mysteries wherever she goes. This time, in Amanda in Alberta: The Writing on the Stone, not even the one leaving home she still gets involved in a situation.

Amanda invited Leah, her friend from England, to vacation in Alberta, Canada. For Leah – as it was for Amanda when she visited Leah in England – so much seemed strange to what she was accustomed to at home.

Amanda’s parents are busy people but make time to take the girls to various interesting places, such as dinosaur museums, a cattle drive, and unique stores for shopping for “cowboy” attire. While they were at a rodeo, Amanda noticed a little stone drop out of a clown’s pocket, but she couldn’t get the man’s attention to tell him. When she picked up the stone she noticed unusual markings on it, so she slipped it into her own pocket. Things happen from then on to make Leah’s vacation one to remember! Cowboys argue over something, a surly bothersome man keeps following her, she is suspicious of ‘questionable’ people – and Amanda and Leah are involved in another sometimes dangerous adventure.

Darlene Foster‘s writing is suited to young readers. The Amanda series is fast-paced, action-filled, and written so that the young main characters are the real problem solvers but with adult involvement.

You can read my reviews of two books in Darlene Foster‘s Amanda series: Amanda in Arabia: The Perfume Flask, and Amanda in England: The Missing Novel.

You can find Amanda in Alberta: The Writing on the Stone listed on my BUY THE BOOK! page.

I received a copy of this book from the author in exchange for my honest review.

Amanda in England: The Missing Novel is book three of the Amanda series by Darlene Foster. Written for middle grade readers it is a quick-paced easy read.

Amanda is a curious adventurous twelve-year-old whose friend in England invited her to come for a visit. Having a love of travel she happily accepted Leah’s invitation.

From the time Amanda arrives things begin happening. One thing leads to another, and she finds herself involved in the mystery of a missing valuable book. Young readers will enjoy the antics and escapades of Amanda, Leah and two local kids they meet as they encounter a strange acting lady, run into trouble when two men chase them, and try to keep all the trouble they’re in from Leah’s parents. While following Amanda readers will also be learning a little about some of the sites and sights of England.

Darlene Foster has written four books in the Amanda series so far. If you want to read my review of her first book in the series, go to Amanda in Arabia: The Perfume Flask.

You can find Amanda in England: The Missing Novel listed on my BUY THE BOOK! page.

This little book is the first in an adventure series for children. It is an enjoyable way to learn about the UAE – the United Arab Emirates – without being there to do it.

Canadian author Darlene Foster has written an entertaining and educational book that gives the reader insight into life in the UAE. She has created a believable character, twelve-year-old Amanda Ross, whose desire to travel leads to the amazing opportunity to leave Canada for a month’s vacation with relatives living in the far away Arabian country. Not long after her arrival, Amanda purchases a perfume flask that mysteriously was saved just for her. She soon discovers why as she is thrust into an exciting adventure on a secret mission she will never forget.

This story was written for preteen readers, but is one anyone would enjoy. Darlene writes vivid pictures, masterfully delivering descriptive insights into the lifestyle of the people of the United Arab Emirates with its rugged desert regions, while drawing the reader into a memorable adventure.

This may be the book to start a child on a journey through the written word, especially since it is the beginning of a series. The second book is just out, but start with this one. And be sure to read it for yourself!

You can find Amanda in Arabia: The Perfume Flask listed on my BUY THE BOOK! page.

Thanks for reading, and .. Creative Musings! 🙂